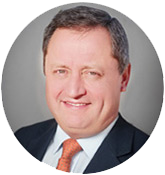 During his tenure at Bombardier, Trevor was responsible for sales of more than 150 aircraft, with a combined value of nearly $3 billion. Over nearly three decades, he held a variety of key positions, the most recent of which was as Vice President of Sales, leading the business aircraft sales team in Europe, the Middle East and Africa.

Early in his career, Trevor trained as a pilot in the Royal Air Force Volunteer Reserve, and he has been closely involved in aviation since. He spent six years at British Aerospace, working on both commercial and business aircraft programs. He then joined McAlpine Aviation, a business aircraft operator, where he was responsible for sales of the company’s wide range of aircraft management and maintenance services.

Prior to joining Bombardier, Trevor was a sales manager at Short Brothers, the oldest aircraft manufacturer in the world.

Trevor Lambarth holds a degree in Mathematics from the University of Southampton, in the United Kingdom.