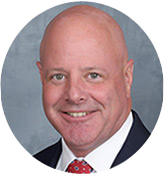 As Vice President for our South Central region, Robert Garrymore ("Bobby") is responsible for establishing and maintaining relationships with Guardian Jet’s brokerage and consulting clients.

Robert joined Guardian Jet having served as President of the Corporate Sales division for Wheels Up. Prior to joining Wheels Up in 2013, he was President of Executive Jet Management (EJM), a subsidiary of NetJets (a Berkshire Hathaway Company). In addition to his executive role at EJM, Bobby served in a variety of positions during his 15 years at NetJets, including jobs in management, sales and operations.

A business aviation industry veteran, he is a commercially rated pilot and former Certified Flight Instructor. In his early career, he served roles at Jet Aviation Business Jets, an aviation management company, and Galloway group, where he handled jet aircraft sales.

Robert Garrymore holds a BA degree from Widener University in Chester, PA, and resides with his family in Plano, TX. In 2019, he earned his aircraft broker certification from the International Aircraft Dealers Association.