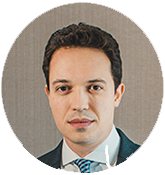 With an extensive background in both aviation and finance, Bastos has served a wide range of clients throughout his career. Prior to joining Guardian Jet, he enjoyed a successful career with the aircraft manufacturer Embraer Executive Jets.

In this new position, Bastos will be Guardian Jet’s first executive representative in South America, Central America, Mexico and Southern Florida. He will be responsible for establishing and maintaining relationships with the company's aircraft brokerage and consulting prospects, clients, vendors and industry partners.

“I’m honored and humbled that a highly respected and award-winning aviation professional such as Gabriel would leave a successful brand like Embraer to join our growing team,” said Mike Dwyer, Managing Partner of Guardian Jet, LLC. “He is the consummate, values-oriented professional – the perfect fit with what we call our ‘Guardian DNA.’”

From 2012-19, Bastos served as the Regional Sales Director at Embraer. Based in Mexico, he was responsible for new and preowned private jet sales in that country as well as in Brazil, Colombia and Central America. In 2016, Bastos relocated to New York City, where he oversaw aircraft sales in the northeastern U.S. During his seven-year tenure at Embraer, he earned the Top Performer LATAM Sales Director award in 2013, 2014 and 2015. He was also named the Top Performer Worldwide in 2013 and 2016.

“I admire their ethics, culture of transparency and relentless pursuit of perfection,” Bastos said of Guardian Jet. “In my last position, we collaborated on multiple new jet sales and went through every stage of the transaction—from the first presentation through new jet delivery. Guardian Jet’s technical knowledge and Vault digital platform are second-to-none. No other consulting and brokerage firm can match their sophistication and knowledge. It’s not just a ‘one man show.’ It’s a collective, where some of the most talented and experienced aviation minds meet and share their expertise to serve their clients together. It’s the family that I wanted to be part of.”

Previous to his Embraer role, Bastos was a Business Trader for Cisa Trading, the international wholesale trading company, based in Sao Paulo, Brazil. Earlier, he worked within the finance industry as a Structured Business Sales Analyst in Itaú Unibanco, based in Sao Paulo. In addition, he served as a Treasury Specialist at BMW Brazil Ltda., and in the Wholesale Credit and Risk Management Department at BMW Financial Services.

Bastos earned a bachelor’s degree in Business Administration from Fundaçao Armando Álvares Penteado, in Sao Paulo, Brazil, as well as a post-graduate certificate in financial management at Ibmec Sao Paulo. He also honed his negotiation skills through training at Columbia Business School in New York City.

A native of Brazil, Bastos is fluent in Portuguese, Spanish and English.

About Guardian Jet
Founded in 2002, Guardian Jet, LLC is a world leader in aircraft brokerage, appraisals and consulting. Based in Guilford, Connecticut—with satellite offices in the U.S. and Europe—the firm distinguishes itself with its focus on integrity and industry expertise, and by consistently providing business value to clients. Guardian Jet’s core mission has always been to earn the right to buy and sell aircraft on behalf of its clientele by providing great consulting advice, market intelligence and flawless execution. The company’s online Vault aviation asset management portal is designed to help clients quickly search for new or replacement aircraft, and easily manage an aircraft just as they would any asset.