Earlier this year, at NBAA-BACE in Las Vegas, I presented on the topic of fleet planning. And during my talk, I was grateful to sit down with Craig Olson, the Vice President of Aviation for Starbucks.

As the director of a Fortune 100 flight department and 20-year veteran, Craig’s got some real street cred when it comes to leadership. In his last squadron, as a Commander in the Navy, he oversaw and supported 110 aircraft 300 pilots and 1,500 personnel.

And something else that’s very impressive is that he has more time logged as a member of the famous Blue Angel squadron than anyone in history.

Following are some of the highlights of Craig’s and my conversation. 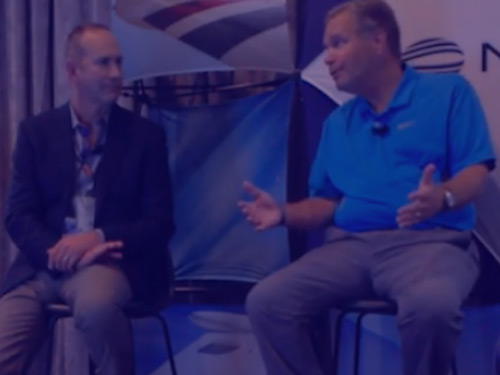 Don Dwyer: Craig, can you briefly describe your aviation career?

Craig Olson: Having grown up in the Pacific Northwest, my roots are in float planes. Once I got my ATP, I had to figure out if I was going to go do the airline thing, and, thankfully, the Navy came along. So I joined the Navy and went straight into flight training. I was lucky enough during my 20-year career to be in the cockpit for 19 of them flying tactical fighter jets, F18s. About one third of my time was spent with combat fleet squadrons, one third was in an educational role as an instructor pilot, and other third was flying ‘blue jets’ around.

When I was ready to graduate from the Navy, I had to figure out what I wanted to do with my life. So, I balanced the decision of working for corporate America vs. flying for the airlines. Thankfully, I landed here in business aviation.

I was lucky enough to land back in my hometown, in the Pacific Northwest, flying a high-net-worth individual in a pair of Global Expresses. I did that for about three years, and then the Chief Pilot opportunity opened up at Starbucks.

Within my first year, lo and behold, the director role opened up. And now I’m coming up on my two-year anniversary as the VP of Aviation at Starbucks.

Don: So, Craig, now two years into your role as the VP of Aviation, it’s got to be a really different job than Chief Pilot. What's the thing that surprised you the most?

Craig: It’s not necessarily a surprise, but the biggest change is that now I’m dealing with people. Before I was dealing with flying, so that’s the main difference.

But specifically, for me, the major challenge right off the bat was that our founder/owner/CEO of the company decided he was going to go from a one-stop shop (where we operated his airplane, and operated the corporate side of the house), and move his airplane into a standalone operation.

So we went through the process of separating those two operations. Now he has a distinct operation for him and his family, operated by his own crew. And I serve as the vice president in a shared hangar, overseeing our co-location arrangement.

Don: Wow! That’s got to come with some pain.

Craig: Yeah, most of my staff says it’s like going through a divorce, but you’re still living in the same house!

Don: So you now report to the CFO. How’d you go about gaining alignment with him and the new leader?

Craig: One of the dangers you have in a flight department is to do everything so well that you fly under the radar and live on an island, away from the corporation. That's kind of what happened with us. The environment I stepped into was doing business really well. The other dynamic was that Howard [Schultz, who was then Chairman and CEO of Starbucks] was pro-aviation, a big supporter.

During his tenure, he built and essentially owned the flight department, so we didn't really have interaction with the C-Suite, or Legal, or Insurance. Everything was all funneled through one person.

Well, that all changed over the course of my reign. So that was my mission number one: finding the conduit path to downtown. I needed to align myself as best I could with all of those entities from corporate—whether it was Legal, risk management, or the accounting and finance function. Thankfully, because of my reporting to the CFO, I was able to quickly get into the C-Suite level. That way, I could align our team with the vision and strategy of the company. I was also able to engage with the other functional groups that are needed when it comes to building your team for fleet planning and aircraft acquisitions.

Don: I know you’ve worked hard on your fleet plan. What are the kinds of things that you're thinking about as you enter the next generation of fleet planning?

Craig: One of the things, as you know, is that you’re continually fleet planning. Even though we might not be looking for airplanes for five or six years, we're still going through our fleet plan every year to make sure that what we have is still germane to our mission. We look at the values of the fleet. We look at what the marketplace is doing and see if there’s potential for trade outs. I'd say we continually go through the process.

Then when our plan’s timing is right, we ask ourselves, “Okay, so is now the right time to make a change?” If it is, then you start to assemble and engage with the stakeholders who are listed in the plan. We also will reach out to industry experts, like you, who can help us because I don’t have all of the answers.

One of the great pleasures of working in this industry is having the opportunity to meet someone like Craig. He’s obviously at the top of his game with regard to running an aviation department in such a dynamic company as Starbucks. I think his candor, along with his firm grasp of virtually anything that leadership of that type might involve, make a conversation with him valuable to all of us.